I’ve decided to live unapologetically for the kind of mom I am. I’m not a fancy one or a prestigious one. And I’ll never be perfect. But I’m a good one. Some days, even a great one. And if you ask my son, he’ll tell you I’m the best. And I think that’s the only validation that’s essential.

I’ve read a lot of blogs lately. A LOT. I’m an incredibly light sleeper. The smallest sound causes me to stir and awake. It’s obnoxious. A fly could fart. Downstairs. And I’ll hear it. So imagine what my nights are like when my husband is doing his very best to draft up our divorce decree with his insufferable snoring and lip smacking. {You truly have no idea}. It leaves me with quite a few nights when I struggle to fall back asleep. So when I get bored with my own thoughts, I’ll tune into the digital world and let the quiet hours of the night take me away. I know, I know. The light of my device isn’t doing me any favors. But lying in bed for several hours isn’t doing much for me either. I mean, the world is awake somewhere. Right? And in the best interest of my husband, it’s probably good that I distract myself with something semi-productive. Unless you consider domestic suffocation to be productive…

There are so many opinions out there. SO. MANY.  I suppose that’s the beauty {and the curse} of our media. I follow a handful of the motherhood ones. Some for humor. Some for inspiration. Some for commiseration. Some for tips and tricks. And some for reasons that I’m not even sure why. Which might explain why I find myself easily bothered by the content of those. Because they’re consistently objectionable and obviously written to stir controversy. I’ve previously mentioned my discomfort for controversial manifestation so I must be some sort of glutton for punishment. But it’s kind of like a terrible movie. No matter how bad it is, I won’t walk out. I have to finish it. So even painful articles get my attention. But it’s a lot of head shaking and nose crinkling. When did motherhood become such a ferocious topic? Has it always been one? Eleven years into it; am I just now shedding my coat of naivety? Is social media to blame? Society? Maybe just the evolution of the ways of the world. I don’t know but somehow the competition to be the leading lady is fantastically insane. And I feel like I’m kind of over it before I’ve even been in it. Sure, I have my moments when I worry about keeping up with the Pinterest-perfect mom. But then I remember that Pinterest is just a virtual board of organized ideas and visions. Ideas and visions that I choose to execute in my home. With my family. And as far as I know, there isn’t anyone else up against me for the lead within these four walls. {For now at least. I’ll likely have to dispute that one with my daughter later on}. Which is all I need to be concerned about. Because if when I fail, they offer up the mercy I need to bounce back. Without the added guilt for being off target.

So all those things you read that tell you otherwise, the ones that direct you to be better than all the others? And if you’re not, then you have to feel bad and apologize for falling behind. Well, not me. I’m not apologizing for that sort of thing anymore. I’m not going to get caught up in the hoopla that leaves me with more paralyzing anxiety that I don’t need. I do my thing. With a complete heart. And all things considered, I do it pretty dang well. I’ve done it single, I’ve done it married, I’ve done it working outside the home, I’ve done it working inside the home, I’ve done it staying at home. And guess what? They’re all pretty difficult. Some are seemingly harder than others but each poses its own significant challenges. And therefore, each deserve their own podium. Without the need to rival them against each other. Because I just don’t need to compete with myself {or others} over something that can be complete by itself. 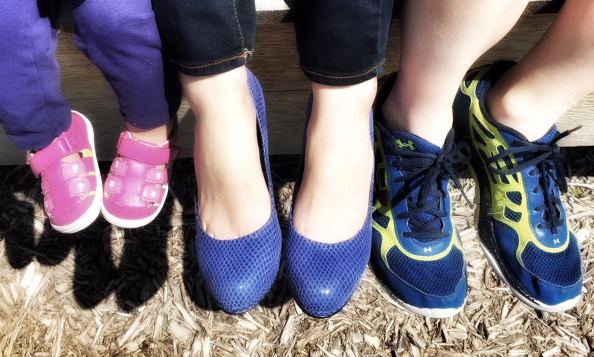 So let’s stop being so apologetic for stupid, insignificant stuff. Maybe then the ways of the world will evolve, again. And our daughters won’t have to read so many ridiculous blogs when they grow up and can’t sleep.