It has been a cool and cloudy week. But nevertheless, there is some semi-sweet sunshine in my soul. After a few weeks of self-inflicted strain, I’ve found myself bidding adieu to someone [something] that has decidedly been dismissed as part of my long-haul life. And I can breathe. Again.

They say many people who come into our lives only exist for a season. And as true as it is, I have always struggled with that. I hang on to things. The extra stuff. I hang on to relationships. The toxic ones. I hang on to memories. The bad ones. All for reasons that make very little sense. So it’s time to make an intentional effort and do some considerable cleanup. Buddha has quoted that the key to happiness is learning to let go. But letting go is hard. It’s really, really hard! The big stuff. The small stuff. The people, places and things. And for me, it becomes an epic battle of constantly reminding myself that the hard stuff weighs me down. It prevents me from moving forward. And it leaves me drowning in a pit of quick sand with hardly a soul to pull me out. Because only I can be the one to let it go.

Life has very few things that are worth the tormenting pains we often put ourselves through when we hang on to something [or someone] that isn’t good for us. And yet, letting go is such an incredibly difficult feat. For some strange reason, we’d rather be miserable than merry. But as they say, the more you do it the easier it gets. So here I am, developing my daily dose of discipline and making a public cry that this is my year to give up more firmly and live more freely.

It’s time to bless and release all the people, places and things whose season has come to an end. Bless those with attitudes that make me anxious. Bless the negative and the nasty. Bless the pretentious people. Bless those who heave the hurtful comments. And bless all the things that mob my mind and suffocate my sanity. Because I believe there’s finesse with the bless and peace in the release. I’ve spent so much of my life getting hung up on the hurt and not enough with the healing. So it’s high time to slash this boulevard of brokenness and lighten the load along the way.

I’m not saying it’ll be easy but it’ll be worth it. Because the struggle today is building strength for tomorrow. 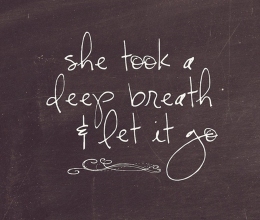 View all posts by Alison

One thought on “Bless and Release”